Compared to the last ma from January, the Ad Alliance's reach of around 30 percent has remained stable, in contrast to the market.

The highest reach of titles marketed by the Ad Alliance is achieved by DER SPIEGEL, which grows to 4.53 mill., and STERN, which reaches 4.09 mill. readers. The two titles are thus ranked first and third among the free-selling general-interest magazines. The biggest reach gainer in ma Pressemedien 2022 II is BRIGITTE. The women's magazine gains 350,000 readers, reaching 1.98 mill. readers per issue. This represents an increase of 21 percent! GALA also achieves strong reach, with 1.89 million people. In the women's magazine segment, 610,000 people read BARBARA every month.

The biggest reach gainer in the TV program guide segment is rtv, which grows by 260,000 readers to 3.89 mill. First and second place in the food segment again go to the magazines ESSEN & TRINKEN with 1.32 mill. and CHEFKOCH MAGAZIN with 1.13 mill. Both titles make significant gains with a strong increase of 130,000 readers each. ART grows to 250,000 readers.

The leading knowledge magazine is once again GEO, which is growing to 1.91 mill. readers. National Geographic Deutschland also achieves strong reach in this segment with 1.05 mill., P.M. reaches 730,000 and GEO Saison grows to 540,000 readers. First place in the living category once again goes to SCHÖNER WOHNEN, which reached 1.35 million people. Among the business titles, CAPITAL reaches 540,000 and MANAGER MAGAZIN grows to 510,000 readers. 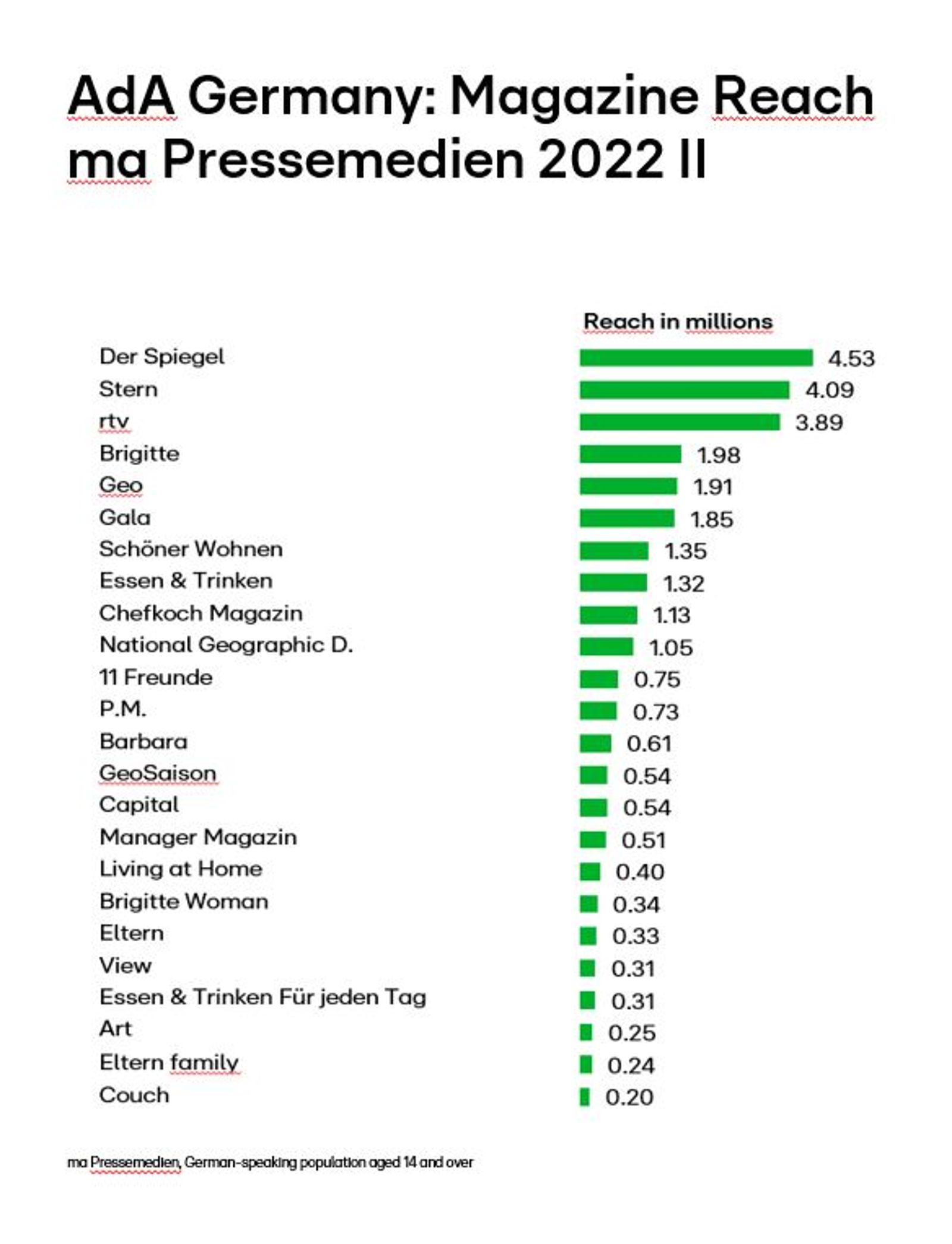 In the ma Pressemedien, the reach of over 150 titles, consisting of magazines, weeklies, supplements as well as reading circles and cinemas, is determined on a semi-annual rolling basis. A total of 37,423 people aged 14 and over in Germany were surveyed to determine the reach of general-interest magazines. Agma conducts the media analyses (ma) on behalf of its members, which also include the Ad Alliance publishers.