Some 500 invited guests from media, politics, business and showbiz celebrated Gruner + Jahr’s 50th anniversary in Hamburg – first at a senate reception at City Hall, then at a get-together in the Grundsteinkeller. 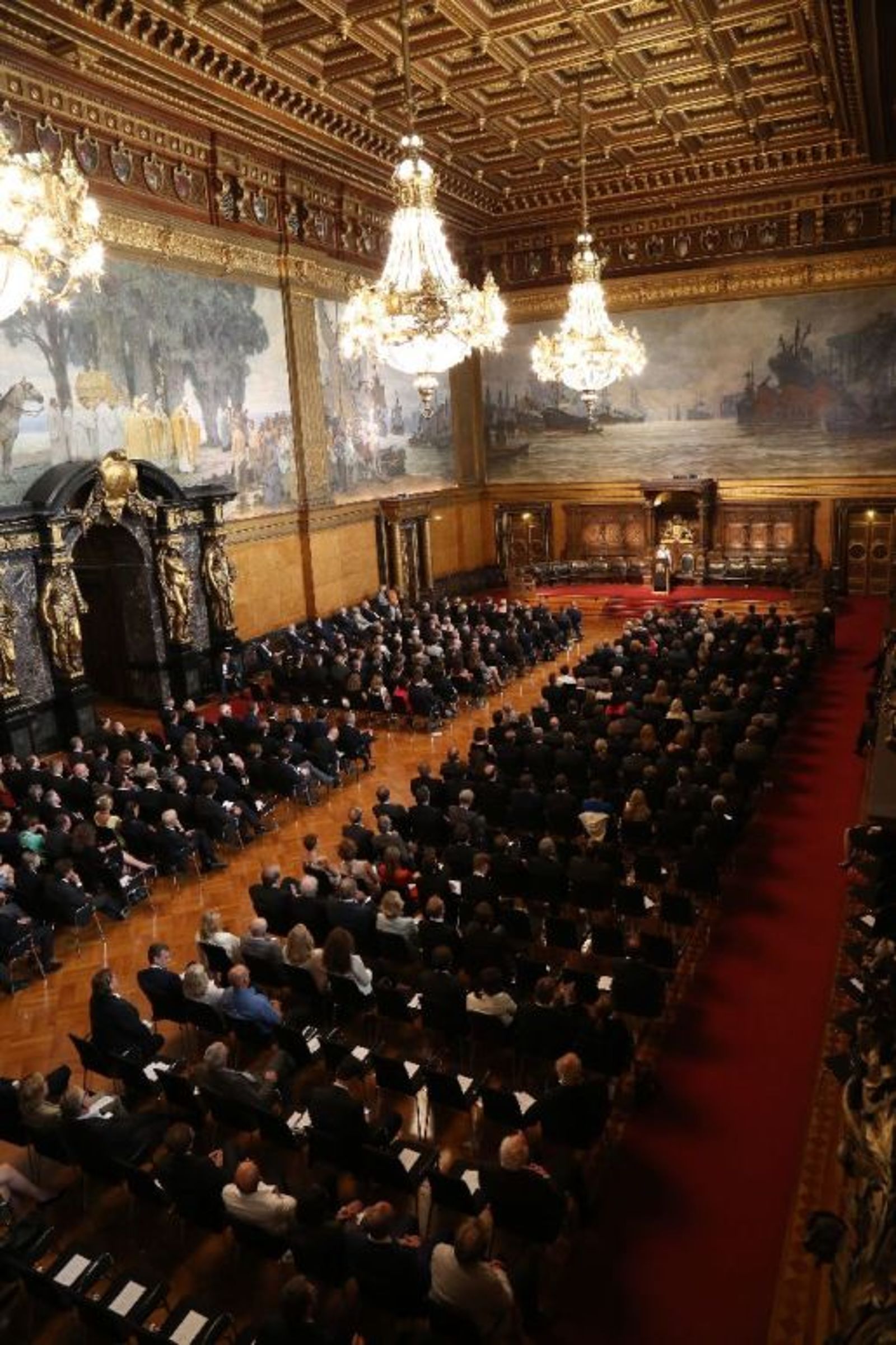 When the First Mayor stepped up to the microphone a hush fell on the magnificent Grand Ballroom of Hamburg’s City Hall. Representatives of Bertelsmann, led by family spokeswoman Liz Mohn, Supervisory Board Chairman Christoph Mohn, and Chairman & CEO Thomas Rabe had taken their front-row seats next to G+J's three managing directors; members of the founding Jahr family had taken their seats at the front of the hall; and the animated conversations between former directors and the current executive team came to a halt as everyone listened to the words of their host.

"Today, the Free and Hanseatic City of Hamburg pays homage to an important company, a formative publishing house and, ultimately, an entire industry. So there is quite a lot of historical significance and tradition in the air,” Olaf Scholz began. “I would therefore like you to see this reception partly as an expression of the Hamburg Senate’s appreciation for a free and independent press. After all, anniversaries such as Gruner + Jahr’s fiftieth aren’t just an occasion for some nice festivities, but also an opportunity to fundamentally reiterate the significance of the institution celebrating its anniversary. And we are delighted that its significance is still considerable." Hamburg's First Mayor emphasized that Gruner + Jahr and the City of Hamburg are closely linked: “The great journalistic achievements of your company are an inseparable part of Hamburg’s history and present as a major media city.” He pointed out that the “media city” label dates back to a time when it was primarily the major publishing houses and their editorial teams in Hamburg that shaped Germany’s social, cultural and political trends. Today, while the picture has become more colorful and a lot of new media services have been added: “The heart of the media hub remains its content expertise – and that is what Gruner + Jahr’s journalistic and curated media stand for. They have repeatedly made their mark on the social consciousness of our Federal Republic,” said Scholz.

Following the Mayor’s speech, Thomas Rabe took the floor. “We regard this invitation as a great gesture and honor for Gruner + Jahr” said Bertelsmann’s Chairman & CEO, thanking Hamburg for the reception. He reminded listeners of the year 1969, when Bertelsmann bought a stake in Gruner + Jahr: “When Reinhard Mohn put the finishing touches on Bertelsmann’s participation in Gruner + Jahr, it marked the beginning of a great relationship, and what I see as a real enrichment for both sides. Gruner + Jahr is a perfect fit for Bertelsmann – and that is true now more than ever before. "

First-rate staff, publishing executives and journalists who have shaped and continue to shape the house; independence, journalistic freedom and responsibility; and a stable ownership structure, over 45 years of which were in the form of an exemplary partnership between Bertelsmann and the Jahr family until last fall: According to Rabe, these are the three factors that were instrumental in Gruner + Jahr’s success - and will continue to be so in a digital future: "We all know that media companies and media businesses are changing, in particular through technology. But we also know that in the media business, technology without media content is little or nothing. Gruner + Jahr is very actively tackling the challenges of digital and is changing from a position of strength.” Bertelsmann’s Chairman & CEO feels that these are excellent conditions for the next 50 years – and for the golden “wedding anniversary” that Gruner + Jahr and Bertelsmann will celebrate in October 2019.

Julia Jäkel, Chair of the G+J management board, then described how the past 50 years have shaped the media company’s present. She emphasized that companies would be well advised not to throw out everything old in order to succeed in the future. She recalled John Jahr senior, Gerd Bucerius and Richard Gruner, saying G+J’s three founders had created a legacy with a future: “Their motivation for setting up Gruner + Jahr was, of course, primarily economic. They knew that only by working together they could be strong. But there was more to it: They didn’t want the company they founded to be just another business. The three men shared an attitude. A core belief. They wanted a free press in Germany. They wanted a publishing company that wasn’t dominated by a single patriarch. John Jahr described this philosophy towards his editorial teams as follows: “You can write whatever you want. As long as it is correct and accurate.” It is this journalistic legacy that characterizes Gruner + Jahr to this day. It is this free, liberal in the best sense, and sometimes even rebellious character that makes our company unique. And we have no intention of throwing it out.” Jäkel declared that this is a climate in which great stories flourish, an atmosphere where groundbreaking innovations are born. She said it is this spirit that makes G+J so fascinating: “This company isn’t just any old business. It is brimming with people who are interested in our world, who are curious, who want to witness it in all its facets.”

But what, asked the CEO, should the G+J of the future look like? The kind of G+J that will still be invited to City Hall on its 100th anniversary? How to preserve what has been created here? And how, at the same time, to transform it so that it can move with the times - or ideally be one step ahead of its time? Jäkel’s answer: “The heart of G+J will continue to beat for journalism. We will report and provide information vividly and in depth, with the necessary distance and critical eye, without hype or hysteria. And we will continue to serve up entertainment and fun, open up new worlds, and showcase new products. This G+J won’t follow the sage advice of so many experts to burn all the bridges to the past. On the contrary: We will continue to build on what sets us apart.” Gruner + Jahr will bring good craftsmanship to nurturing its well-known brands at home and abroad, she said. It will further expand its more recent magazine titles and develop new magazines. And: “This G+J, which will go on to celebrate many more anniversaries, is naturally also digital.”

“As you can see, we have inherited a great legacy,” said Jäkel in closing. A legacy in which many of the approximately 500 people present here had a significant share – thereby helping to make G+J what it is. “My wish for us is that we all have a really good party tonight. Then, tomorrow, we get to work again on leading Gruner + Jahr into a good future.” Following the Senate Reception, the guests continued to the “Parlament,” the restaurant in the basement of City Hall, where they celebrated Gruner + Jahr’s anniversary until well after midnight.