To Paywall or Not to Paywall

Paywalls are increasingly a financial necessity for publishers. In 2020, while there was a high demand of trustworthy news, it seems news sites behind a paywall have fared better. Chris Turner-Green, director of the G+J i|MS London office, believes there will be a further increase of paywalls throughout Europe - their design and concepts however will change.

It was only last year that 50% of publishing executives, as surveyed by Reuters, said they would be focussing on subscription revenues. Since then, the news media landscape has experienced unconceivable change in a matter of months. Whether it is the way we consume news media, from where we source it, how much we trust it or how it is financed – what we see right now, is not what we once knew.

Up to now the trend in paywalls has seen quality, business and finance journalism increasingly accessed through payment, while mass, celebrity and sports journalism has remained free to access. Equally the political bias of the news brand has an association to the propensity to paywall, with centre-right publications paid-for, while left-wing and further right publications remain free. However, the situation is becoming increasingly less linear with both a growing number of exceptions to this rule of content, and also a lack of uniformity as to what a paywall is. Hard or soft, metered by number of articles or time spent, premium or all content and even member donations models like THE GUARDIAN.

The pandemic news agenda itself saw paywalled publishers wrestle with the commercial benefits and the moral obligation to inform and educate all those who choose to access their site.  For those who did not falter in their paywall strategy, were rewarded with more subscriptions. Those who did waver by excluding pandemic live news from premium paid content, saw an increase in demand for background information and a high willingness to pay for it. While those with no paywall saw the biggest increases in users, but no corresponding increase in adverting demand. That said the collapse in ad demand did not just affect the free-to-access sites, it affected all news media.

Digital subscriptions from paywalls have boomed during the lockdown.

Looking at the No.1 paywalled news brands in France, Netherlands and Denmark; FIGARO.FR, NRC.NL and BERLINGSKE.DK respectively – all saw an exceptional increase in subscribers, with Figaro seeing over 3 times the normal level of new subscribers across March-May compared to the period immediately before. A trend that irrespective of country and prevalence/extent of lockdowns has been sustained, meaning that NRC.NL and other like news brands, have held onto their digital strategy, intensified their online marketing and sustained their investment in quality journalism – all of which has seen a continued high level of subscription sales.

This increase in subscriptions has markedly increased the average revenue per user (ARPU) for paywalled news sites – and as a result it is generally accepted that they have to date comparatively fared better, though the ARPU of a digital subscriber still remains significantly lower than that of a loyal print reader. As the advertising market recovers paywalled news brands should again be able to monetise users multiple times through subscription and via advertising, but the reality of this is far less simple.

As explained by Julian Kösters, Managing Director STERN Digital ”critical to [STERN+] success is to keep wastage as low as possible and to provide the different user cohorts with the most tailored offers during their user journey. If we succeed in this, we can increase the customer lifetime value of our users”. Looking to the future, he continues “ a fundamental change from our current freemium strategy is currently not planned. However, we track and monitor the user journeys on our offers very closely and constantly test different approaches to consistently optimise all KPIs along the conversion funnel. As soon as we make discoveries or hypotheses during these observations that are associated with a change in the positioning or mechanics of paywalls, we will of course check this open-endedly and always based on numbers”.

The need to test, is echoed in Belgium too where Roularta Media Group which operates free-to-access, metered and registration only entry sites, personalised their user experience by varying the number of free articles per month based on first-party data, while also quickly developing a new offer to increase not only digital but also print subscriptions having recognised a resurgent trend in direct-to-consumer print sales.

Norwegians most willing to pay for digital news content

But while the commercials suggest paywalls are better, and there is an increasing willingness to pay for news, not everyone is prepared to pay, and substantial differences are evident across Europe. According to Reuters’ Digital News Report 2020, 42% of Norwegians are paying for their news, while only 7% are here in the UK. It should not be forgotten, that the ad market typical demands a critical mass of users to win significant advertising revenue, and paywalls, particularly hard-paywalls can make maintaining this critical mass difficult. 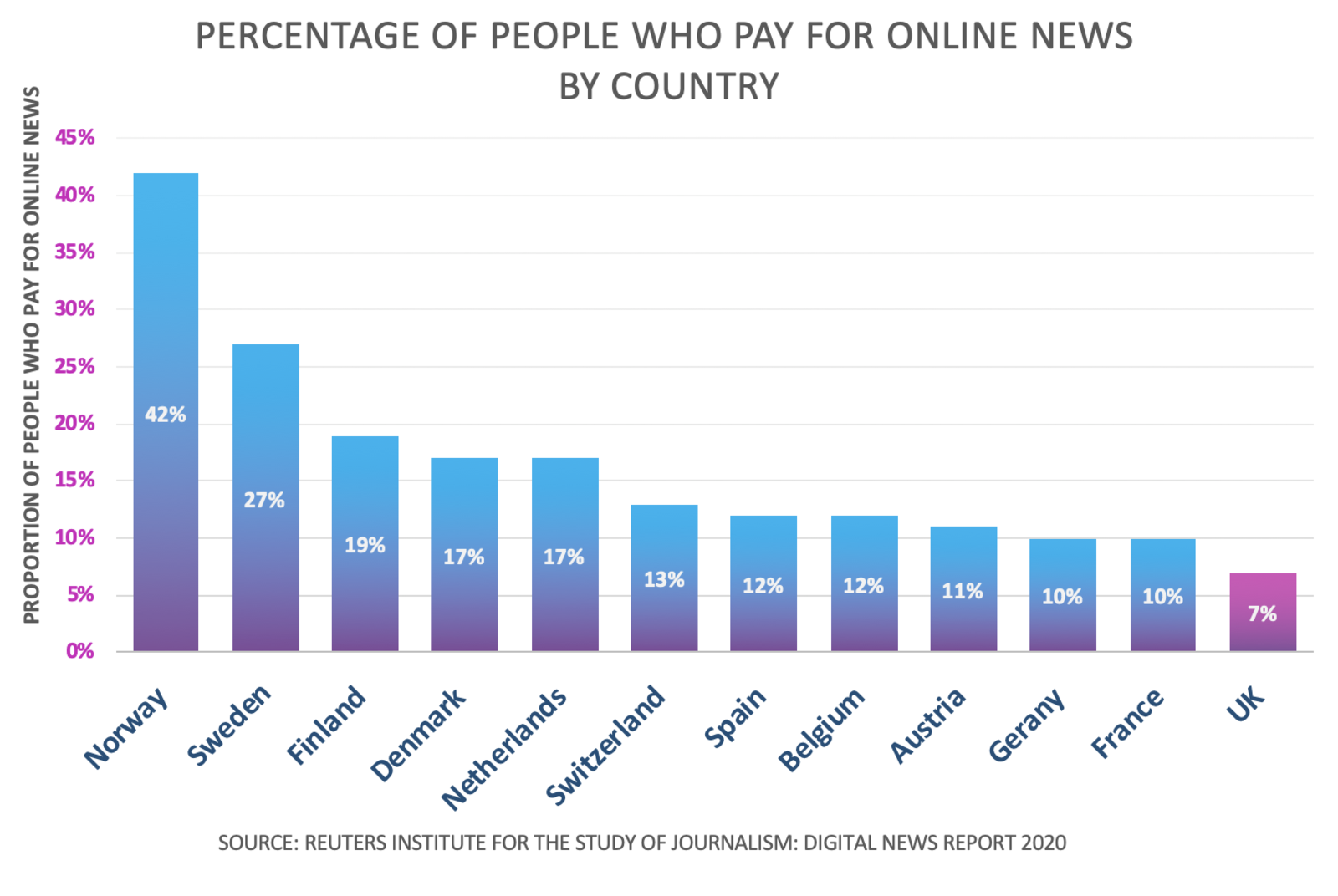 While I am pro paywalls, they are not a silver bullet. There is a link to ad revenue and scale of users, with paywalls negatively affecting this. Paywalls will increase in prevalence, both because so many news brands are already on that journey and that the pandemic laid-bare how vulnerable some media brands are without a dual revenue model.

On a personal note, if nothing else, the hardest of paywalls negate the need for clickbait articles to subsidise original professionally curated quality journalism. But paywalls should never be evaluated in isolation, and as Julian Kösters says “good journalistic offers will continue to generate complimentary revenue in the future. Hence publishers will have to diversify their revenue pillars even more and will strive for end-customer revenues.”